Home > How a bathroom fails to function

How a bathroom fails to function 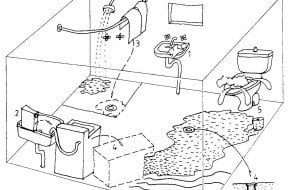 How a bathroom fails to function in a two bedroom house, serving 3 families with 15 people.

A new cake of soap is opened over the basin, the wrapper falls into the basin, gets wet and blocks the waste pipe trap.

A box of laundry powder is used doing a load of washing. There is no high shelf so the box is rested on a small ledge between the laundry tub and wall. The vibration from the machine knocks the box into the laundry tub. During the spin cycle, water softens the packet and soaks into the soap powder. Pieces of wet cardboard and chunks of detergent sit in the tub and go into the tub waste pipe. (It is now difficult to wash a young child in the tub). Further loads of washing with soap suds and lint continue to block the waste pipe.

In the shower two nappies have been left to dry on a curtain rail near the small window. They fall to the ground and block the shower waste. The grading of the floor to the shower waste has never been quite right and there is always a pool of water near the comer of the shower.

The washing machine was bought second hand, the pump motor fails and to remove the dirty wash water requires tipping the machine on its side. Water floods the floor but the floor waste cannot cope with quantity of water. When the floor waste was being built, and the concrete slab poured, a small plug of concrete accidentally went down the open pipe. Ever since it can drain only a trickle of water, if any.

Someone coming to use the toilet finds that the roll of toilet paper has been soaked by the washing machine water. At the local shop toilet paper costs $5 a roll so they use an old piece of rag as toilet paper and flush the toilet. Not long after a young child flushes a soft drink can down the toilet. It seems to disappear. The next toilet user finds the toilet backing up and flooding the bathroom. (Assuming the blockage can be fixed it will still be difficult to clean up the mess given the faulty floor waste.)

Where does the water go if the blockages are not fixed?